August has been a month filled with geopolitical events and natural disasters. North Korea tensions flared up, simmered, and then resurfaced after a missile was fired over Japan. Over in the US, President Trump raised the risk of a government shutdown by 30th September while Hurricane Harvey continues to upend southern Texas.

These event risks could extend into the end of third quarter, but their effects on the markets are likely transitory in nature as the global economy is still doing fine.

In August, precious metals, US government bonds, technology stocks, and emerging market equities performed well. As economic fundamentals remains firm and markets have proven resilient, we remain optimistic despite the August events. StashAway’s asset allocation is driven by sound economic principles, and will not overreact to short-term transitory events, while taking into account valuation levels, as discussed in July’s CIO Newsletter. 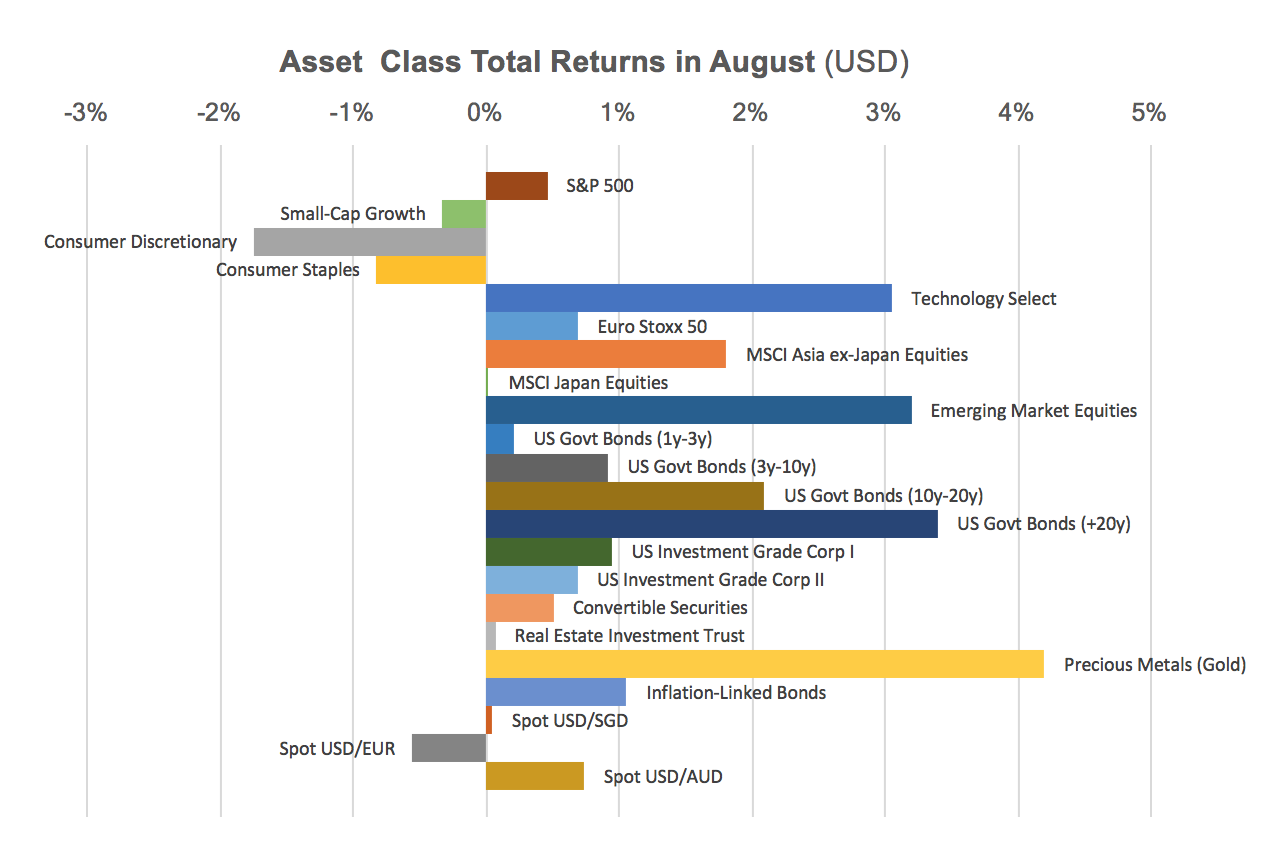 StashAway builds resilience into your portfolios to help you stay with your long-term investment plans. Our portfolios are highly diversified across asset classes and optimised to take into consideration economic data and relative valuations.

Avoid timing the market, even when missiles are flying. Adopt a dollar-cost averaging approach and stage your investments with a predetermined, regular schedule.

August geopolitical events and natural disasters served as a great example of how firm economic fundamentals have supported market’s resilience. Despite growing tensions with North Korea, the possibility of a US Government Shutdown by 30th September, and the disasters caused by Hurricane Harvey in southern Texas, markets have recovered as expected.

Some investors have overreacted to these events, and as a result the S&P 500 suffered an intra-month drawdown of 2.08% between 7th and 18th of August. The good news is that fundamentals remain firm and the S&P 500 demonstrated resilience by rebounding to finish the month with +0.5% return (as shown in figure “Asset Class Total Returns in August” below). We find it important to note this, even though StashAway currently does not have any allocations in the S&P 500 due to valuations.

Elsewhere, in Japan, equities did react negatively to the firing of a North Korean missile over Hokkaido, but it quickly recovered with close to flat returns for the month.

Looking broadly, protective assets, such as precious metals and long-dated US government bonds, have outperformed most growth-oriented assets. Having said that, US technology stocks and emerging market equities were the exceptions, as they have managed to perform comparably well. In the case of emerging market stocks, there are further upsides, as the segment is still relatively undervalued when compared to US equities.

Although the uncertainty in August could extend further into the end of the third quarter, we expect them to be transitory in nature as the global economy remains firm (as can be observed in figure “a scorecard for global growth” below). The US economy, widely viewed as the leader of the current global recovery, had seen its growth rank improved from 20th to 52nd percentile of its own history (since January 1982). US growth is currently close to its long-term mean. With positive year-on-year growth of +2.19% (industrial production) and a benign headline inflation of +1.7%, these data points place the US comfortably in the “dis-inflationary growth” regime.

In other parts of the world, China, Eurozone, Japan, Australia, and Singapore have also seen significant improvement in their percentile ranking for growth since September 2015. The United Kingdom and India are the exceptions. In the UK, aside from lacklustre growth, the weaker pound post “Brexit” has created some challenges to manage “imported inflation”. The situation in India is worrisome too – growth is falling along with rapid declines in inflation and could be symptomatic of a deterioration in incomes and purchasing power. 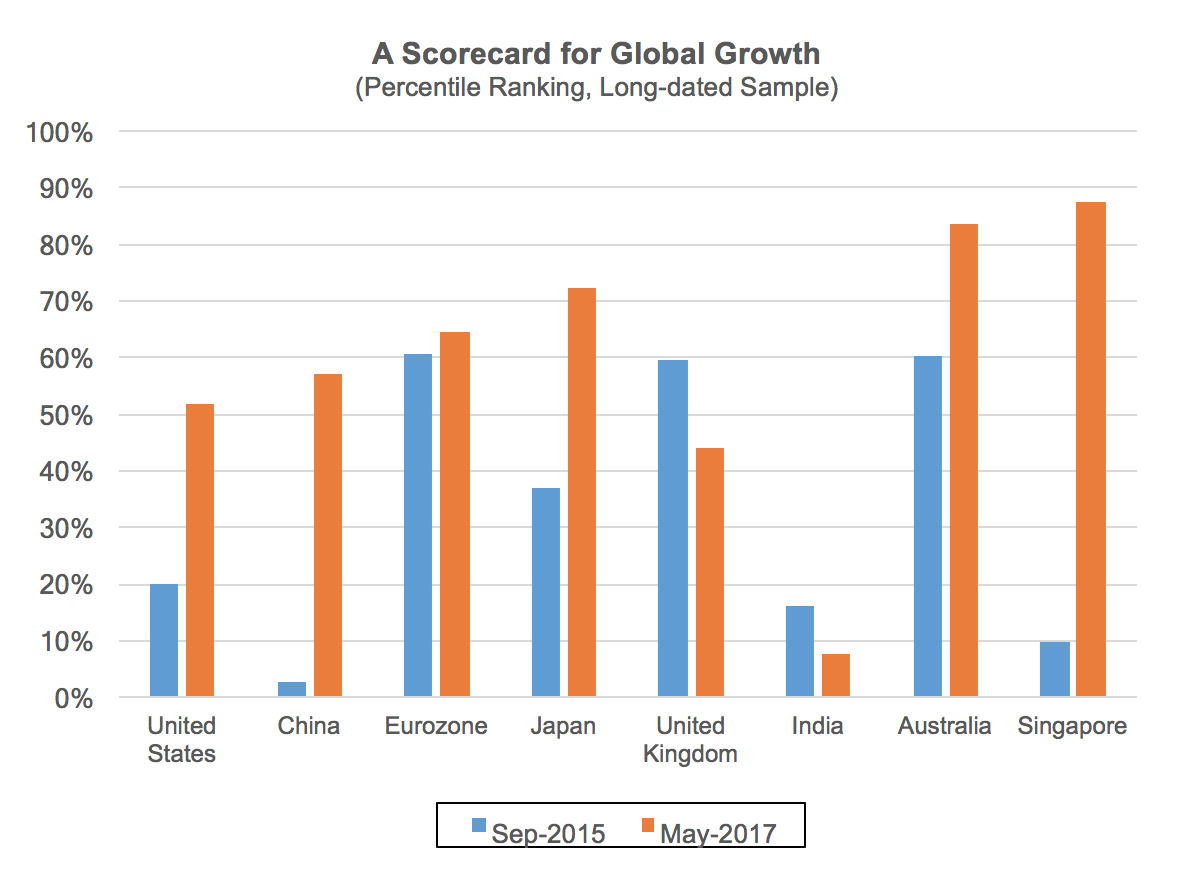 StashAway makes asset allocation decisions based on sound economic principles, and does not react to short-term transitory events, while also taking into account valuation levels, as discussed in July’s CIO Newsletter.

Market Timing is Difficult and Costly When Getting it Wrong

Consider this: Six of the ten best performing days for the S&P 500 occurred within two weeks of the ten worst days. The fact that best and worst days tend to be clustered closely together and during periods of high volatility adds further challenge to the immortal act of market timing.

Aside from being an impossibly tough act to pull off consistently, the opportunity cost of timing the market wrong is very high. According to JP Morgan Asset Management, a fully invested portfolio tracking the S&P 500 has returned an average of 9.85% per annum (between 3rd January 1995 and 31st December 2014.) In stark contrast, market timers who missed the best ten days of the S&P 500 would see their returns decline substantially, from 9.85% pa to 6.1% and 3.62%, respectively. These numbers can be observed in figure below, which is an excerpt from JP Morgan Asset Management. 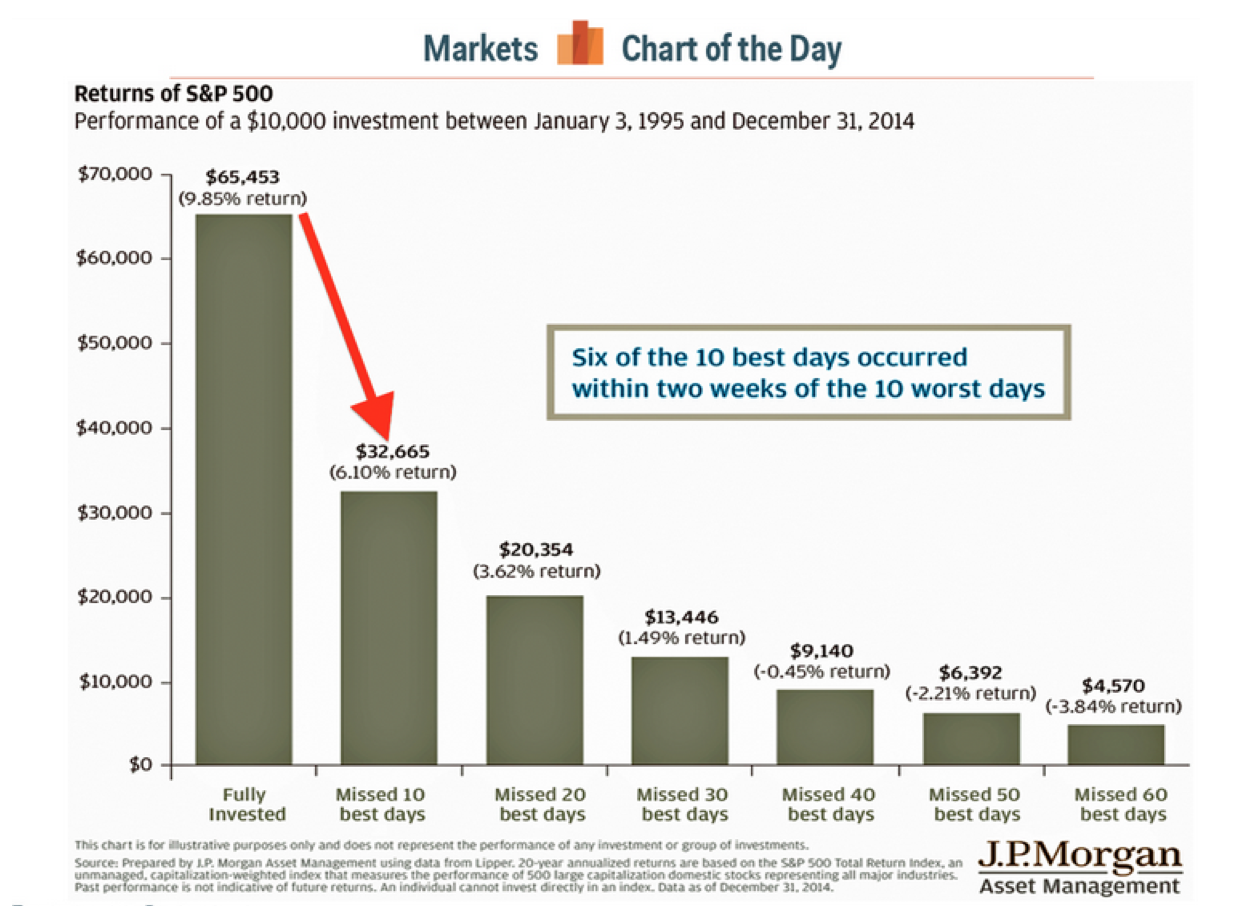 Stage Your Investments Instead!

So, if you’re investing for the long term, forget trying to pick stocks or time the markets, and start staging your investments on a regular schedule. Ideally, you should have a fixed amount of money that you save and invest every month through a standing instruction mechanism to make sure that emotions don’t get in the way of your monthly schedule.

The way you need to spread the investments strategically depends on how significant the excess cash is, as a proportion of your total net worth. In particular, we recommend the following plans:

2 Where possible, we conduct the percentile ranking based on historical data going as far back as January 1982. However, some countries in the study do not have data available for the entire period.

Market Commentary: Long-term view on KWEB | Delisting of a VIE