Only have 30 seconds? Here’s what you need to know:

We’re still in the midst of a correction

We are optimistic about the recovery of growth-oriented assets

We’re still in the midst of a correction

A correction is a reverse movement (usually negative) of at least 10% in a market. Corrections are fairly common, even for a bull market. In fact, a correction is a mechanism the market needs in order to purge itself of impurities (e.g. bad behaviors, such as “fear of missing out”). This purge allows the market to reset and  sustainably move forward on healthier footing in the future.

So did economic fundamentals start to deteriorate and cause the correction? No. On the contrary, leading economic indicators from the Conference Board continue to point to robust and steady growth across major economies. Understandably, most growth-oriented assets have given back most of their gains in January. At its peak this year, consumer discretionary stocks in the US were in the money by about +10.6%. As of 6 April, year-to-date returns for the sector have been reduced to 1.9%. US technology was the sector that rebounded the quickest from the correction, and made new high on by 12 March. However, US technology fortunes have reversed since the flare up of Facebook data privacy breach. “Trump-trums” (Trump’s tantrums) against Amazon added further woes to the sector. By 6 April, US technology has only returned a meagre 0.5% year-to-date.

Figure 1 - Growth Assets Gave Back Much of January’s Gains 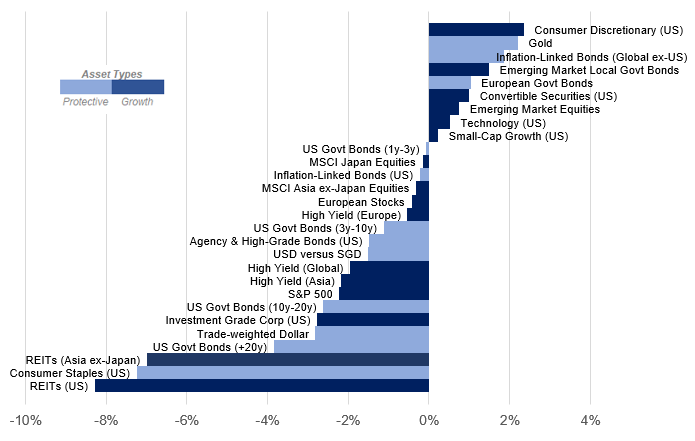 The outperformance of protective assets over growth ones become more apparent when looking at return figures since 1st March. As can be observed in Figure 2, most of the top performing asset classes are protective in nature (shaded in light blue bars). Escalation in trade battles and the rout in tech stocks have created strong demand for safe assets which in turn caused a general decline in government bond yields. This has helped create an exception in growth oriented assets. Due to its yield-sensitivity, US REITs have gained 3% since 1st March. It was the only growth asset to have outperformed.

Let’s turn our attention to the US Dollar. Although the US Federal Reserve has been leading the charge in tightening interest rates among global central banks, the Dollar has so far defied interest rate differentials. In the year leading up to 6 April, the trade-weighted US Dollar and USD/SGD have fallen 2.8% and 1.5%, respectively. The first attempt to weaken the Dollar can be traced back to US Treasury Secretary Steven Mnuchin. At the World Economic Forum in Davos, he made a comment that a “weaker Dollar is good for US trade”, which sparked a 1% decline in the trade-weighted US dollar on 24 January. Interestingly, the trade-weighted US Dollar has not fallen further since Davos, despite further escalations in trade tension. 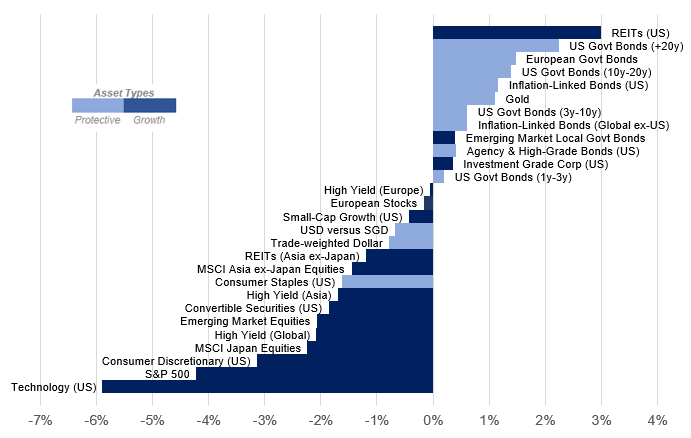 In early April, the stock market was starting to stabilise after numerous efforts by senior White House officials, such as Larry Kudlow and Steven Mnuchin, to de-escalate the tension with China. That was the case until the evening of 5 April, when Trump called for additional tariffs on another $100 billion USD of imports from China. Despite the fact that Trump’s “art of the deal” tactics are well-known, his willingness to keep raising the stakes against China has shook investors negatively. But one needs to read Trump’s theatrics with moderation. His record so far speaks for himself: Trump tends to deploy threats to gain leverage on others. He is accustomed to making bold threats and outsize demands, only to back down and accept more modest concessions.

In the case of US-China trade battle, it is likely more a bark than a bite. Granted that there may be more skirmishes here and there, but chances are high that the US-China trade riff would blow over. We already have seen some very encouraging developments at the Boao forum on 10 April. There, President Xi put up a stately performance, and made pledges to push ahead with the opening up of China’s financial industry. There are specific timelines, too, and China has affirmed its commitment to remove limits on foreign ownership of banks, brokerages, and insurers within 2018.

Why growth-oriented assets will recover, in two charts

Aside from the latest positive development on US-China trade relations, there are two additional reason why we are sanguine about the prospects for growth-oriented assets to recover. 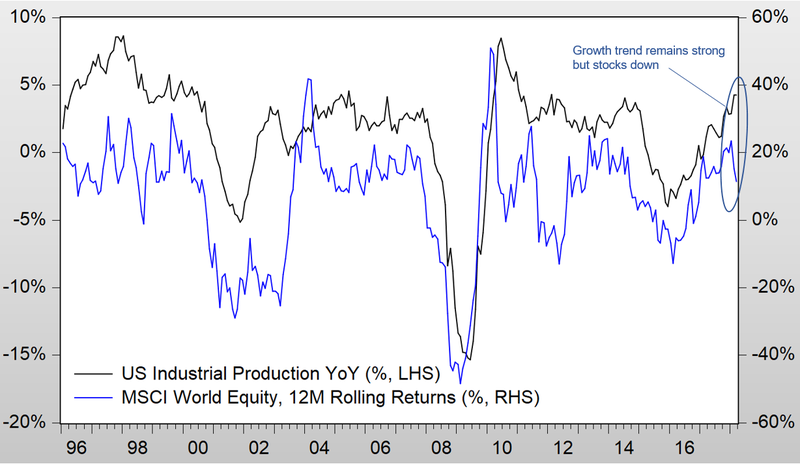 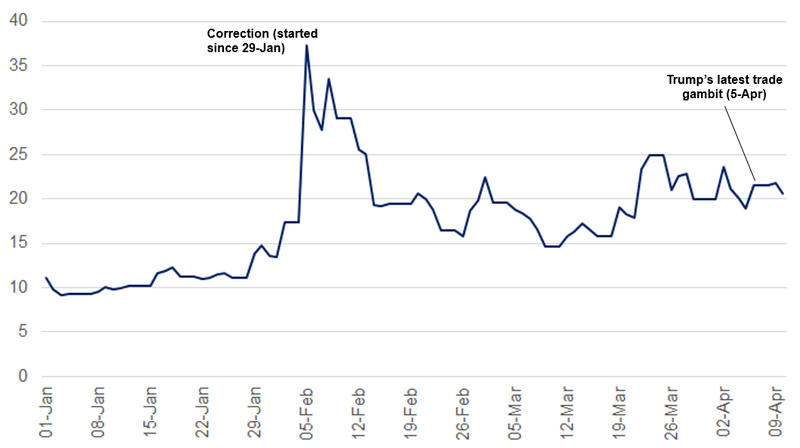 Take a long-term view on your investments

It’s important to take a long-term view with your investments, and not to get caught up in short-term noise. That sentiment goes for both when the markets are strong, as well as when there are dips. The path towards recovery from the recent correction proves that short-term reactions to market corrections can turn out to be unnecessary, and even costly, overreactions.

Let’s consider three types of investors in Figure 5. Investor A contributes regularly at $2,000 each month into the S&P 500 from January 2011 to April 2012, where there was a correction in between. Investors B and C, however reacted to the market correction where B stopped his or her monthly contributions and  withdraw all investments, and then re-enter the market after the correction; 2) stop contributing, but keep his previous investments there; or 3) maintain his long-term strategy and continue to invest $2,000 each month. Action #1 would result in a portfolio that is valued at approximately $130,000; action #2 would result in just a little more at approximately $135,000; and action #3 would result in just under $150,000. This goes to show the validity and importance of dollar cost averaging through a correction. 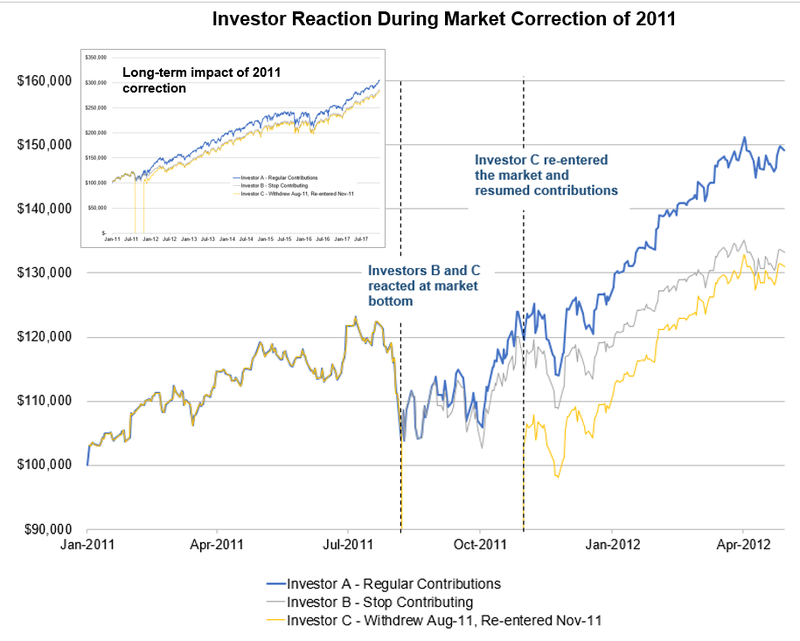 We maintain that an intelligently diversified portfolio that reflects the economic fundamentals will withstand the market fluctuations, allowing long-term investors to reap the benefits of dollar cost averaging and less stress over geopolitical trends and market events. Economic fundamentals are still strong, and we recommend investors take the long-view and stay invested in growth at significantly fairer valuations compared to than before the correction.

Market Commentary: Long-term view on KWEB | Delisting of a VIE