Why do I have a negative time-weighted return, but positive dollar return?

Your TWR is negative because your portfolio’s return has decreased in value since your first deposit.

Here’s an example of when this might be the case:

Let’s say you deposited $100 SGD to start your StashAway account in January and the market goes down 10% by September. You’ve lost $10 SGD (out of $100 SGD invested) in your portfolio and you’re down to $90 SGD. You then have an unexpected windfall (lucky you!) and decide to make a $1,000 SGD deposit in September. By December, the market goes up 5% after the second tranche of investment. 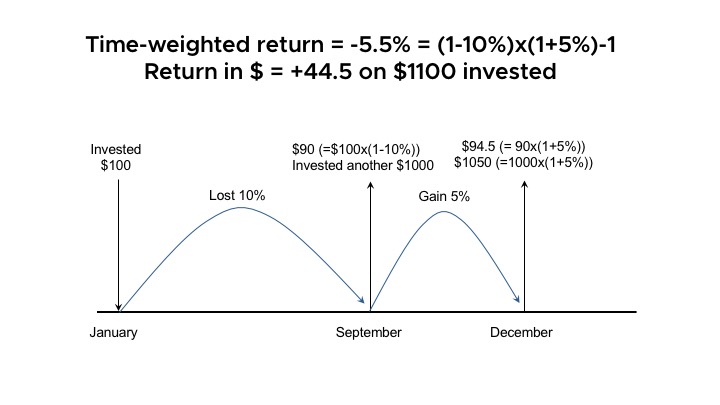 What are my returns like now? Well, you would have positive dollar gains because you just gained about $44.50 SGD on a total of $1,100 SGD invested.

But this wasn’t because the portfolio has performed exceptionally thus far: it went down 10% then up just 5%. However, most of your money was invested right before markets went up.

The time-weighted return is negative because the first deposit of the investment performed poorly between January and December, but your simple dollar return is still positive because of when you made your deposits.