What is the Base Effect?

It’s common to compare data from two periods to understand how a company or the economy is doing over time.

Some common comparisons are “Year-Over-Year”, “Quarter-Over-Quarter”, and “Month-Over-Month”. Each respective measure simply compares one moment in time to the year, quarter, or month before.

These measures simply tell us the rate of change from one period to the next. They're commonly accepted, but are rarely true apples-to-apples comparisons. In other words, it’s impossible to make a truly perfect comparison between two points in time because there are so many external factors influencing asset prices, economic indicators, and whatever else you’re looking to understand. With that said, we can accept that things will never be perfect comparisons, as a general comparison is better than none at all.

If one of the periods we're using as a reference point for comparison were affected by an extreme condition, it would significantly affect the rate of change. So, looking at the rate of change without considering the context would give us a misleading story.

The way the reference point influences the comparison is known as the base effect.

Let’s look at a few examples.

Suppose the usual price of a luxury hotel room was $1000 per night as of February 2020. But as the pandemic worsened in March 2020, fewer people were willing or able to travel and spend money. This impact forced the hotel to slash their prices in half, to $500 per night.

Then one year later, consumers start to spend again, and the hotel increases its room rate to $900 per night. This rate represents a YoY difference of +80%! If you don't consider the pandemic's impact, you'd assume that the hotel was doing very well. But in fact, the increase is only extreme because we're comparing the hotel room price from March 2020 to March 2021. If you were to compare the price from February 2020 to March 2021, you'd see that it had only decreased by 10%.

The YoY growth rate for US industrial production from April 2020 to April 2021 was 17.6%. The US economy was not actually growing that fast - this high growth rate was derived from the fact that April 2020 was the economic bottom of the COVID crash.

If, instead, we compare April 2021 to January 2020 - when things were “normal” just 3 months before April 2020 - we see that the growth rate is actually closer to -2.1%. Growth rates don’t normally fluctuate that much in a short period of time. But the reason for such a stark difference is not that we're measuring a longer period of time (i.e.15 months instead of 12), but rather because the economy is recovering from a major nosedive. 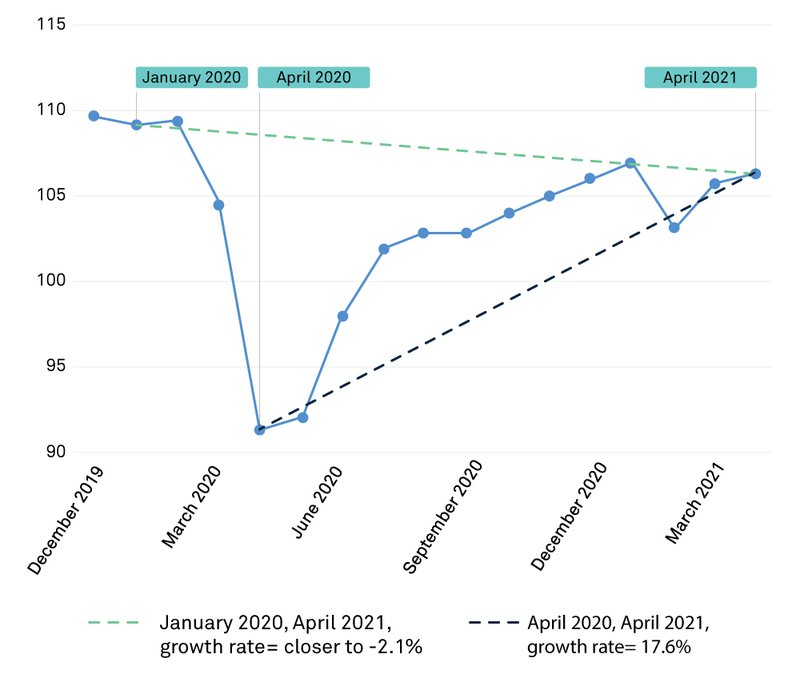 Comparing any period to an outlier will skew the interpretation of the data, and that could lead to making misinformed decisions. Although measures such as YoY can identify trends, it’s crucial to also consider outliers that would affect the points of comparison.

This goes to show that figures we see shouldn’t be taken at face value; we have to ask ourselves what other information and context we need to adjust for the base effect and make well-informed decisions.

The Difference Between Trading and Investing

What It Costs to Invest